The details of John Tojeiro’s Formula Juniors are fairly sketchy as I have discovered in researching the history of my Tojeiro chassis (TAD02/61) purchased as basket case in 2006. So any help in filling in the blank spaces would be appreciated.
The car had been brought back to the UK from the USA and it was suggested that it was the Tojeiro sent to the Far East fitted with a three cylinder two stroke DKW engine for the Hong Kong Mercedes Benz agent Walter Soulke to enter in the Macau Grand Prix.

Looking at my chassis it was fairly obvious that it had been fitted with a Ford 105E engine from the outset and could not be the ‘Macau DKW’ car. The only other known Tojeiro FJ was a BMC engine Tojeiro/Britannia campaigned in the UK by Francis Pound and no one I talked to had any knowledge of any other Tojeiro FJs built.

It was only when Googling ‘Tojeiro USA’ did I come across various 1961 Sports Car Club of America race results not only listing one Tojeiro FJ but sometimes two entered in one race. The name Jay Heizer appeared again and again and further Googling produced a professor at a Texas University by the name of Jay Heizer. Contacting him he told me that he was ‘the’ Jay Heizer having been Tojeiro’s US Agent and had imported two Ford engine Formula Junior cars. 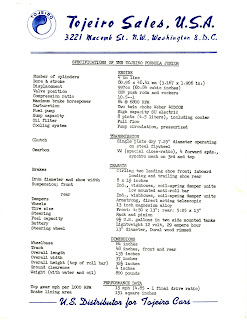 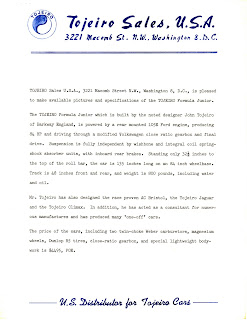 The Formula Junior story so far....

Having concentrated throughout the 1950s on the design of big engine sports cars usually for John Ogier and Ecurie Ecosse plus some 1100cc Coventry Climax engine cars with the arrival of Formula Junior in 1959 John Tojeiro decided to get involved in single seaters and produced a design for a rear engine car.


It was a simple space frame with coil spring/integral dampers units and wishbone suspension at the front. At the rear he attached the coil spring/dampers to the top of the rear hub carriers requiring the chassis to sweep to take the top fixing giving the car a high tail look. It was designed with drum brakes those at the rear being inboard attached to an inverted Volkswagen gearbox. The car ran on 15 inch wheels sourced from Elva Cars and was enclosed in an aluminium body styled by Cavendish Morton.


Francis Pound, having successfully raced MG sports cars, wanted to progress to Formula Junior and he was recommended to approach Tojeiro about a car. Ordering one to be powered by a BMC A Series engine. This was given chassis number TAD 10/60.


On delivery Pound spent 1960 sorting out the car and did not enter his first race, a BARC Members meeting at Goodwood, until March 11th 1961.


In 1957 Tojeiro had been commissioned to design a road going GT car for a new company the Britannia Car Company utilising a space frame chassis, a Ford Zephyr engine and a two door coupe body again designed by artist Cavendish Morton who penned all the bodies for Tojeiro


The Britannia Car Company was owned by Ackland Geddes, an heir to the Dunlop tyre fortune, He wanted a good way to market and promote the GT as sales had been poor (only 6 cars were ever produced) and decided that Formula Junior was a way to promote the name so Britannia Racing was formed and, following the sale of the first FJ bearing the John’s name to Francis Pound, Tojeiro sold the existing design to Geddes.


Three cars were produced during the 1960 season. They were not front runners despite a Basson tuned engine there being little or no money for development and they were up against the well sorted works cars of Lola, Lotus, Cooper, Elva et al.


At the end of 1960 the Britannia Car Company went into liquidation allegedly owing John Tojeiro money for his design services and so it is believed that to recoup some of the debt he took back all the unused Britannia FJ chassis, body and suspension components.


Since the announcement of John’s original Tojeiro/Britannia design Colin Chapman had introduced the Lotus 20 and it was obvious to Tojeiro that rear suspension needed redesigning so the repossessed Britannia chassis were chopped off behind the cockpit and a new rear end grafted on to take Lotus  like rear suspension.


FJ was becoming popular in the USA and Tojeiro was approached at the end of 1960 by Jay Heizer about supplying cars. A deal was done and in April 1961 two Ford engine cars were shipped out to Washington.


Jay Heizer found two buyers Frank Fuller, who was racing a 1957 Chevrolet Corvette and the other by John Marble 'a local wealthy playboy' according to Heizer.